In a few words

How do you repackage a specialist international B2B PR agency (with a reputation for being friendly and approachable) and deliver the right commercial edge for the next chapter in its growth plans?

With Fourth Day offices in London, Manchester, Paris, Berlin, Casablanca and Sydney the business is international in its character and ambitious about entering new markets. The business was founded in 2002 and the origin of the name ‘Fourth Day’ can be found in the ‘Four calling birds’ verse within the ‘Twelve Days of Christmas’ carol song.

They have become well known for their friendly, approachable and no-nonsense ethos, but there was a clear sense that their agency had long since outgrown their previous visual identity. The concern was that the brand no longer appealed to the key decision makers in the businesses and organisations that Fourth Day were increasingly working with and targeting as potential client prospects.

Fourth Day approached Fablr to help them evolve perceptions of their business by undertaking a full visual rebrand followed by the design and development of a new website that would help them communicate their brand and establish them as thought leaders in their field. 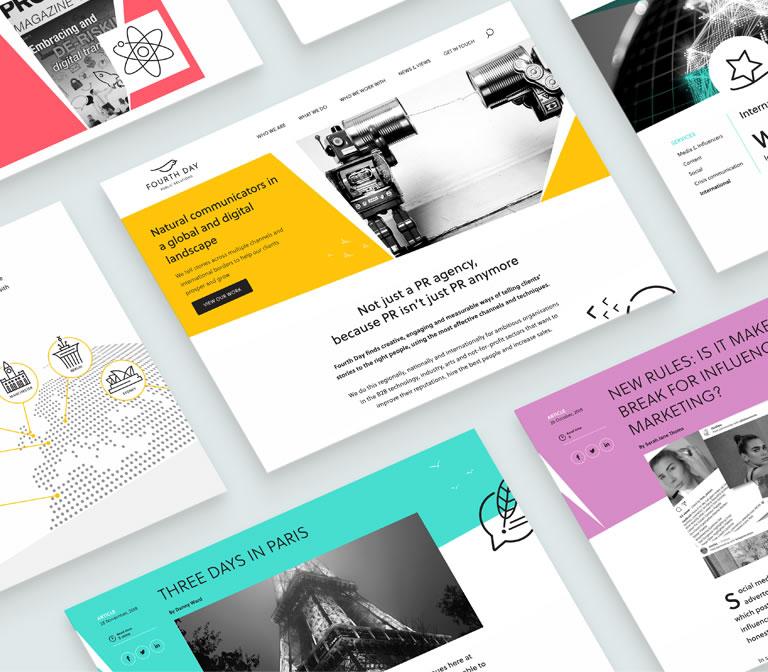 Any rebranding process needs to carefully consider how you can bring stakeholders together on the journey. It’s an approach that always needs to be tailored to individual businesses and organisations, and Fourth Day’s strong democratic ethos and non-hierarchical management structure, meant we needed to allow for feedback from a large set of stakeholders in order to progress the creative process.

To this end, we proposed a discovery phase before any creative work would start. Researching opinions across the business from director level down to individual consultants, conducting workshops and interviews provides a truer picture of the character, shared mindset and strengths of an organisation. From this phase Fablr presented a brand positioning strategy that helped to guide the creative process as the project went forward.

During our visual exploration phase we grew to feel that there was brand equity in retaining the bird themed logo device. The other characteristic that came to the fore as we explored visual frameworks what that of simplicity. The business prides itself on tackling what are often complex commercial propositions in B2B tech, logistics, and retail and clearly articulating them for the right audiences.

What emerged from the process was a new, vibrant and flexible visual language for the business – one that emphasises a creative business that values simplicity and offers serious strategic and international communication capabilities.

"With a very strategic approach from the outset, they really took the time to understand our business and us as people."

Fablr also developed a range of new positioning statements that emphasised how the business was not only relevant but fully embracing of the multi-channel nature of modern PR and communications.

The new Fourth Day logo is at the heart of the new brand identity ethos. A logomark so simple that it could be drawn as a signature. We developed a set of consistent rules that would cover iconography and graphic elements to ensure that Fourth Day’s identity would be consistent wherever it is seen and gives them a visual language unique to their marketplace.

Once we had established the new form the brand would take, Fablr worked on formalising the identity in a comprehensive set of guidelines while simultaneously developing the concepts for the new Fourth Day website.

The rebrand needed to support the business in its day-to-day business and in how it came into contact with customers, peers and prospects.

We developed a range of assets for internal usage including PowerPoint and MS Word templates, external and internal signage as well as social media brand assets. We also gave Fourth Day ready access to their branded marketing assets and templates through a categorised Dropbox based library that all team members can access.

"They continuously delivered for us creatively and technically but they were also highly responsive and proactive and a real pleasure to work with. We were extremely happy with the results and continuously recommend them to our own clients now."

A focal point for their marketing activities alongside social, the Fourth Day website needed to have a focus on regular fresh content and industry-relevant opinion pieces. We delivered a slick and modern looking responsive website which Fourth Day could use to communicate their proposition and services, as well as showing off their expertise and experience with regular blog articles and case studies.

Fablr provided training to the team in the use of the brand assets and on the chosen website platform to ensure that Fourth Day staff members have the expertise they need to maintain the brand and improve their online offering.

Let's talk about what we could bring to your latest greatest project.